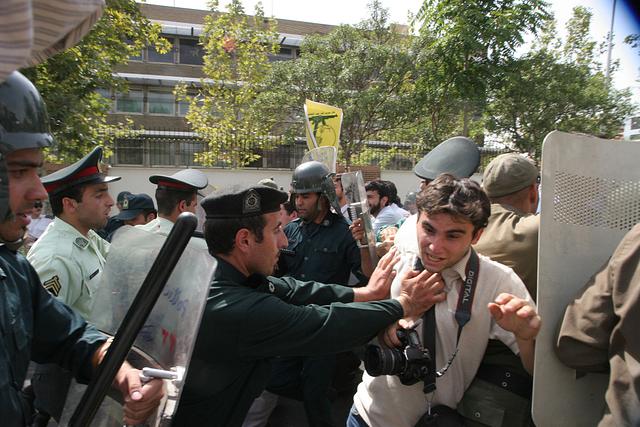 My name is Javad Moghimi Parsa. I’m Iranian and now I’m a citizen in Norway. I have been working as a photographer for about 17 years. Actually, I started photography when I was 18 years old. At the beginning I worked as a waiter in a restaurant in Sari, in Northern Iran, to earn some money to buy a camera for myself.

In 2005 I began taking pictures for Fars News Agency in Iran after I met its picture editor.. While I was shooting for them I used to experience a lot in those four intense years. I’ve always tried to find interesting ways to shoot the subject which I was interested in. I was born in a country, Iran, where real democracy doesn’t exist. Even today there are two kinds of journalists: the ones who work for the government and cannot be really called journalists and the others who try hard to work as critical investigators of our society;
the second are unfortunately working under very complicated circumstances in a country ruled by dictators. In 2005 I got a full-time position as photographer with the national government-controlled news-agency of Iran, in 2007 I was admitted to the NEWS University to study photography. My images were often banned by the government because they didn't like my personal vision of Iran. In 2009 during the public protests, after the so called Iranian elections, photographers weren't allowed to document the events.

Some of my images were smuggled out of Iran and published by international magazines, one was chosen for the cover of the 29 June 2009 edition of Time Magazine. In few days I had to leave Iran permanently since the government might want to arrest me for my images published abroad . I had also to leave my studies behind. I have lived in Turkey and since 2010 I have been living in Oslo, Norway. Now I’m working as a freelance photographer for Norwegian newspapers. My work has been published in many national and international publications .

My work has been published in numerous national and international publications including, the cover of Time magazine, “Iran vs. Iran”. The New York Times, The Washington Post, Newsweek, The Seattle Times, France’s Le Figaro, Paris Match, The Guardian, 6Mois, Colors Magazine, PRI's The World, Toronto star, Amnesty International for the postcard series and others.

2018 & 2019: I received a grant from Fritt Ord to continue the work on my documentary project of exile Iranians around the world.

2016:  Winner a grant from Fritt Ord to continue the work on my documentary project of exile Iranians around the world.

2014-2015: Winner a grant from the University of Amsterdam to make a Photo Documentary of "irregular" transit migrants in Turkey’.

2007: World Press Photo Workshop (the workshop was cancelled due to political clashes between Iran & Netherlands)

2009-2010: Freelance photographer, working on a project documenting the plight of Iranian refugees in Turkey.

2011- Photo exhibition at the Mai senteret in Lørenskog, Norway.

2010- Photo exhibition at the gallery Hofficina Art in Rome, Italy.